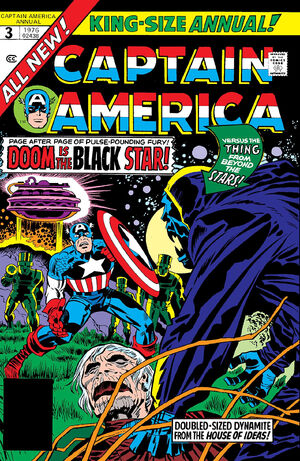 Not so fast you space-traveling ape .. I'm not an easy kill!

Appearing in "The Thing From the Black Hole Star"Edit

Synopsis for "The Thing From the Black Hole Star"Edit

Having been called by farmer Jim Hendricks to investigate a UFO that landed in his meadow, Cap encounters a monster within. Jim uses an alien shock ray on it then tells Cap he knows the spaceship came from a Black Hole star because the pilot is hiding at his house. In a warship in Earth orbit, Troga, an alien, reports to his Commander that Earthmen killed the Stalker they sent for the UFO's pilot. The Commander orders a Combatron sent. In Jim's house, Cap meets the pilot who calls himself 'the Captive." He explains that he escaped from a black hole after a million year effort and that Galactic warships were sent to retrieve him. Soon after, outside, Cap battles the arriving Combatron, holding it off so long that the frustrated Commander ignites its self-destruct with a heat ray, then sends Magnoid robots instead. Seeing another ship landing, Cap sends the others to the Captive's spaceship, then watches as hundreds of Magnoids debark. After briefly battling the robots, Cap retreats to the Captive's ship. There he finds Jim dead, his life force stolen by the Captive. Mutating, the Captive tells of his race that terrorized the galaxy feeding on organic life until inorganic "neo-life" was created that defeated them. Believing himself the last of his species, the Captive plans to feed on all Earth life starting with Cap who, weakened, fends him off with his shield. The Magnoids enter the spaceship but the Captive grows in power and size. Cap knocks him down with his shield and the Magnoids swarm over him and bind him. The Galactic ship slings the Captive and his spaceship into the heart of Epsilon Four just as that star goes nova. Later, Cap reports the incident to a top-level security committee who choose to keep it quiet to prevent any panic.

Retrieved from "https://heykidscomics.fandom.com/wiki/Captain_America_Annual_Vol_1_3?oldid=1416221"
Community content is available under CC-BY-SA unless otherwise noted.