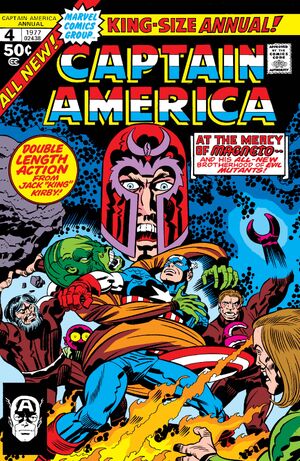 Appearing in "The Great Mutant Massacre!"Edit

Synopsis for "The Great Mutant Massacre!"Edit

Responding to a newspaper ad about mutants, Captain America briefly tussles with Magneto, who is also answering the ad. They're interrupted by Joe Keegan, who tells them that he found a pair of mutants and needs someone with scientific knowledge to care for them. He opens the face of his wristwatch, revealing a tiny man, Mr. One, inside. Magneto levitates the watch away from Joe, only to have his helmet crushed by Mr. Two, the other mutant. Joe takes back his watch, and Mr. Two tosses Magneto through the wall. Later, Steve Rogers checks on the mutants at a local SHIELD medical facility. It seems that Mr. One controls Mr. Two, and Steve has to remind the SHIELD doctor that the two are more than just test subjects when Mr. Two becomes restless. Meanwhile, Magneto inspects a miniature spaceship and convinces his new Brotherhood, Burner, Lifter, Peepers, Shocker and Slither, to abduct Mr. One and Mr. Two. They attack Cap and Mr. Two. who are out for a jog, but the villains are driven off by SHIELD agents. Cap returns to SHIELD only to discover that Magneto kidnapped Mr. One in his absence. Cap theorizes that Mr. One and Mr. Two are one person with two bodies. Meanwhile, Magneto forces Mr. One to do his bidding. Cap and Mr. Two track down Magneto and his minions for a confrontation. Mr. Two is killed by Burner, and, feeling the loss of his other self. Mr. One climbs in the spaceship and sets it to self-destruct. Realizing his cause is lost, Magneto escapes before his base is destroyed.

Retrieved from "https://heykidscomics.fandom.com/wiki/Captain_America_Annual_Vol_1_4?oldid=1416222"
Community content is available under CC-BY-SA unless otherwise noted.