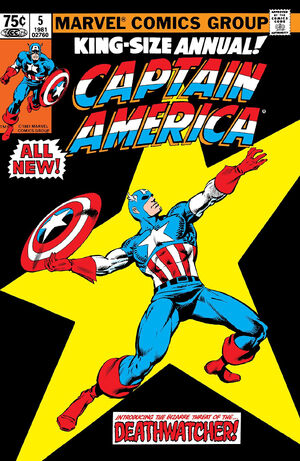 You're not just arrogant, Constrictor ... you're stupid!

Captain America's attempt to stop Constrictor and his men from attacking New York with a stolen Coast Guard ship is momentarily stymied by an onboard explosion. As Cap hands his adversaries over to Police Lt. Powell, a diver team led by Ken Hanson swims to shore, having caused the explosion and videotaped the resulting deaths for Hanson's employer, Samson Scythe. As Cap returns home, Hanson returns to Scythe's estate and reports on the status of their next "project". Steve Rogers inadvertently fails an ad agency interview by spurning the art director's romantic advances. Later, mob boss Carlo Ferrini is fatally electrocuted by a booby-trapped roast turkey at his birthday party. Cap arrives at the NYPD's 11th precinct at the invitation of Lt Powell and meets Sean Gamble, Ferrini's chief rival. Fearing himself a potential target, Gamble agrees to let Cap shadow him. Cap later rescues Gamble from a rigged elevator. Watching from afar, Scythe orders Hanson to engineer a robbery at one of his banks. The next day, while cycling with Bernie, Steve overhears a news report on the robbery and ditches her to intervene. Cap defeats the robbers, but Hanson escapes and lures Cap into a forced meeting with Scythe. Coerced by Scythe to come alone to his estate that night. Cap fights his way through Scythe's extensive array of security systems before finally confronting Scythe and Hanson. Hanson's flamethrower accidentally explodes, setting the house ablaze. Scythe is engulfed in the flames and watches himself burn to death on his own monitors. Cap escapes the inferno with Hanson just as Powell and responding firefighters arrive.

Retrieved from "https://heykidscomics.fandom.com/wiki/Captain_America_Annual_Vol_1_5?oldid=1416223"
Community content is available under CC-BY-SA unless otherwise noted.