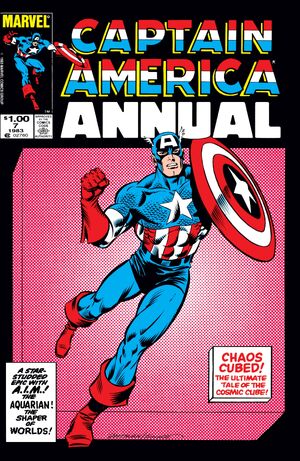 You know this is the first time I've actually assisted in a childbirth!

Appearing in "The Last Enchantment"Edit

Synopsis for "The Last Enchantment"Edit

The Cosmic Cube begins to glow at Project Pegasus. In space, the Supreme Intelligence tells the Shaper of Worlds of the disturbance. In Ohio, Aquarian notices the disturbance. Homing in on the Cube's frequency. AIM attacks Project Pegasus to steal it. Captain America responds to Pegasus' distress call, arriving in time to stop Aquarian from leaving with the Cube. AIM takes advantage of Caps misunderstanding of Aquarian's motives and captures the Cube. Cap and Aquarian follow AIM to their facility. As Cap battles AIM agents Bernard Worrell takes control of the Cube. Cap and Aquarian confront Worrell. Despite Aquarian's warning that Worrell is causing the Cube pain. Worrell uses the Cube to alter reality in multiple attacks against the heroes. Unable to break Captain America's will, Worrell pushes the Cube too far and the Cube fights back by mimicking Worrell's hate and fear. Cap fails at reasoning with the Cube, but the Shaper of Worlds arrives and calms the Cube. He explains the Cube is sentient and evolving. He returns to space with the Cube to oversee its development.

Retrieved from "https://heykidscomics.fandom.com/wiki/Captain_America_Annual_Vol_1_7?oldid=1543271"
Community content is available under CC-BY-SA unless otherwise noted.