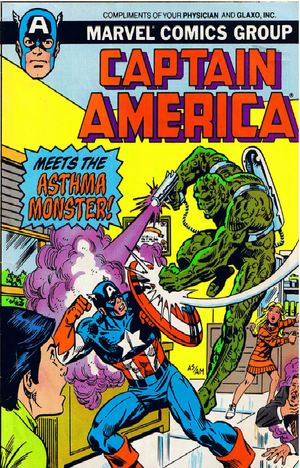 Appearing in "Attack of The Asthma Monster"Edit

Synopsis for "Attack of The Asthma Monster"Edit

Midville is attack by the Asthma Monster, a villian that uses an "Aller-Gun" to inflict asthma symptoms on people who don't naturally suffer from asthma. The only two people not effected are John and Ruth, school children who already suffer from asthma. They realize that taking their asthma medication prior to the Asthma Monster's attack counteracted the villian's Aller-Gun.

The duo call Captain America, who rushes them to the office of Dr. David, a town physician. The arrive to find the Asthma Monster interrogating David about the location of his inhaler stocks. Captain America scuffles with the villian until John and Ruth spray the monster with inhalers. Captain America delivers a final knock out hit, and the group learn that the monster is actually a man in a suit. He tells the heroes that he, too, suffered from asthma as a child, and felt that the rest of the world should suffer from breathing troubles just as he had to. The man is taken to jail, and the town is restored to normal with the use of inhalers.

Retrieved from "https://heykidscomics.fandom.com/wiki/Captain_America_Meets_the_Asthma_Monster_Vol_1_1?oldid=1416634"
Community content is available under CC-BY-SA unless otherwise noted.