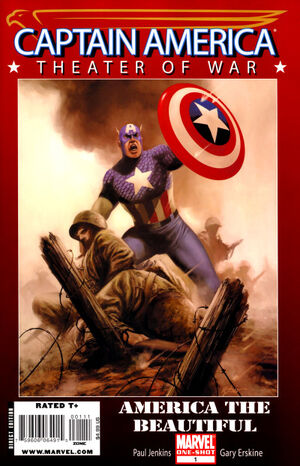 Appearing in "America The Beautiful"Edit

The third in a series chronicling the adventures that made Captain America the hero we know today, Paul Jenkins (MYTHOS) does what he does best, weaving a tale of war, brotherhood and legacy. From skinny Steve Rogers at boot camp to the Super-Soldier leading a battalion of men against the Nazis, this is the Captain America you thought you knew but you’ve never seen. And when the choice is between his country or his best friend, this is the decision he had to make.

Retrieved from "https://heykidscomics.fandom.com/wiki/Captain_America_Theater_of_War:_America_the_Beautiful_Vol_1_1?oldid=1737753"
Community content is available under CC-BY-SA unless otherwise noted.