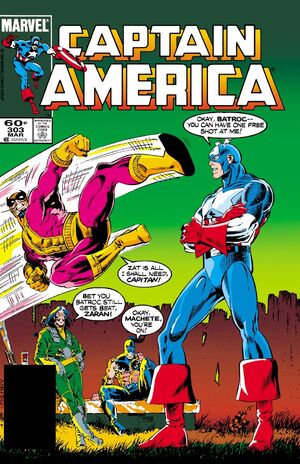 It's triple-trouble time with the greatest grudge match of the decade! Batroc, Machete and Zaran are on a rampage! Cap and Nomad must stop them! But Batroc plans to avenge all his past defeats by the star-spangled Avenger! This time, he has vowed, the winner will be Batroc the Leaper!

Retrieved from "https://heykidscomics.fandom.com/wiki/Captain_America_Vol_1_303?oldid=1658021"
Community content is available under CC-BY-SA unless otherwise noted.