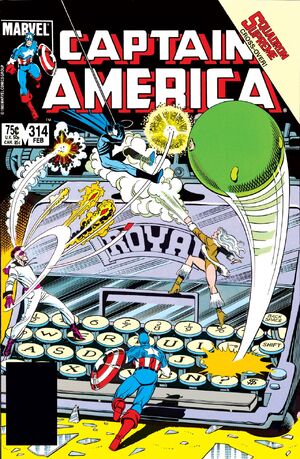 This issue is something of an homage to DC Comics' Batman - Nighthawk has long been seen as a pastiche of Batman himself, and the cover of the issue, with Cap and the Batman-like Nighthawk fighting Nighthawk's outlandish foes on an oversized prop recalls classic Detective Comics covers. Nighthawk's foes, with their habit of picking targets based on their codenames, recall Batman's classic villains. Mink in particular - a thrill-seeking jewel thief with an animal-themed identity and a flirtatious relationship with her enemy, bears strong similarities to DC Comics' Catwoman. In the Magic Carpet nightclub, a patron wonders if Nighthawk had a TV show once - a reference to the 1960s Batman TV series.

Retrieved from "https://heykidscomics.fandom.com/wiki/Captain_America_Vol_1_314?oldid=1723128"
Community content is available under CC-BY-SA unless otherwise noted.