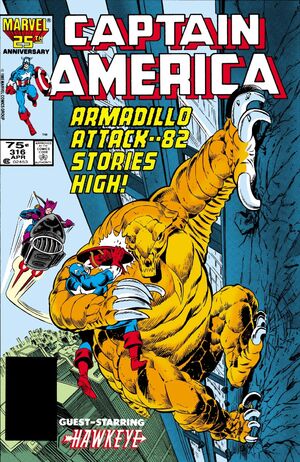 Appearing in "Creatures of Love"Edit

Guest-starring Hawkeye and Mockingbird of the West Coast Avengers. The Armadillo is about to give up a promising career as an Unlimited Class Wrestler, due to devastating personal problems. Can Cap help? Plus: A dramatic turning point in the relationship between Steve Rogers and Bernie Rosenthal.

Retrieved from "https://heykidscomics.fandom.com/wiki/Captain_America_Vol_1_316?oldid=1652869"
Community content is available under CC-BY-SA unless otherwise noted.