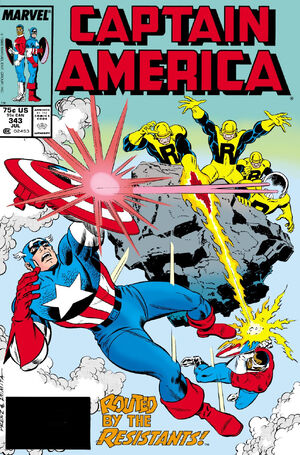 The Captain, D-Man, the Falcon and Nomad vs. the Viper and her legions and the new Captain America and Battle Star vs. the most dangerous mutant force since the Brotherhood of Evil Mutants — the radical mutant liberation front called the Resistants! They're violently opposed to registration of mutants — and wait'll you see how violent!

Retrieved from "https://heykidscomics.fandom.com/wiki/Captain_America_Vol_1_343?oldid=1658061"
Community content is available under CC-BY-SA unless otherwise noted.