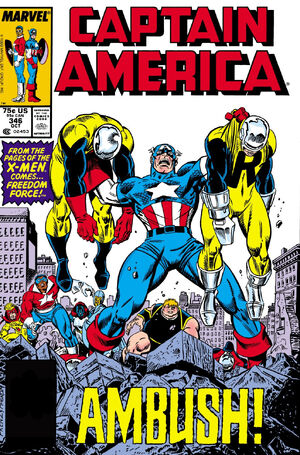 The Government isn't too happy with the new Captain America — not after he slaughtered the Watchdogs last month! They've given him one chance to make amends... by rounding up the mutant Resistants, with Battle Star and the ex-evil mutants of Freedom Force at his side!

Retrieved from "https://heykidscomics.fandom.com/wiki/Captain_America_Vol_1_346?oldid=1765708"
Community content is available under CC-BY-SA unless otherwise noted.