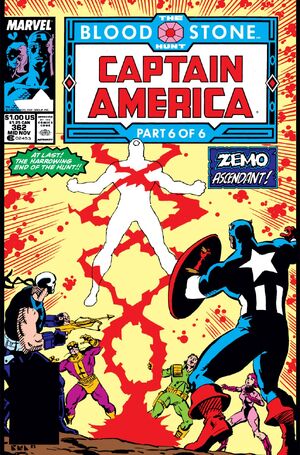 Appearing in "The Bloodstone Hunt, Part 6: Necromancing the Stone"Edit

It's Captain America against Crossbones, Baron Zemo, and Batroc's Brigade! Who will possess the Bloodstone? Plus: USAGENT VERSUS SCOURGE Part V: the true origin of Scourge!

Appearing in "The Night of the Scourge, Part 6: Won't Be Scourged Again"Edit

Synopsis for "The Night of the Scourge, Part 6: Won't Be Scourged Again"Edit

Retrieved from "https://heykidscomics.fandom.com/wiki/Captain_America_Vol_1_362?oldid=1658118"
Community content is available under CC-BY-SA unless otherwise noted.