Part of the 'Acts of Vengeance' event 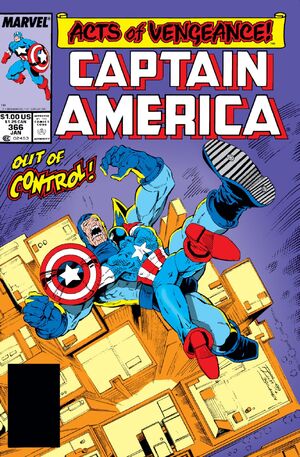 The Red Skull orders Crossbones to help the super-villains who've escaped from the Vault. And to stop Captain America from intercepting him, the Red Skull sends Iron Man's enemy, the Controller! Plus: Cobra and Mr. Hyde were once partners, now Mr. Hyde is out to kill Cobra. Why are they trying to kill each other?

Appearing in "Nowhere To Hyde!"Edit

Synopsis for "Nowhere To Hyde!"Edit

Retrieved from "https://heykidscomics.fandom.com/wiki/Captain_America_Vol_1_366?oldid=1642200"
Community content is available under CC-BY-SA unless otherwise noted.