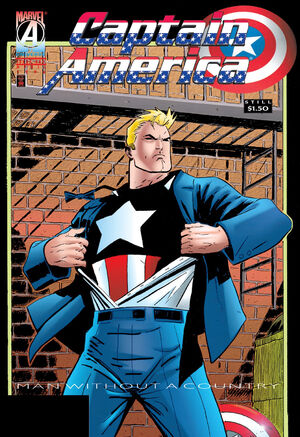 "Man Without a Country"—Part 1 of 4. HAPPY ANNIVERSARY CAPTAIN AMERICA— NOW GET OUT OF THE U.S.A.! When the super soldier is branded a traitor, he is forced into making the most agonizing decision of his 50-year career!

Retrieved from "https://heykidscomics.fandom.com/wiki/Captain_America_Vol_1_450?oldid=1658180"
Community content is available under CC-BY-SA unless otherwise noted.