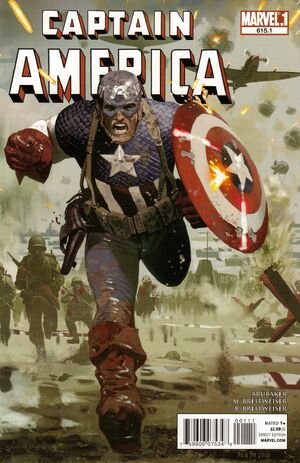 Special POINT ONE issue. START READING with this Point One issue. Steve Rogers emerged from the super soldier program to become the first Captain America, the Sentinel of Liberty. When he died, Bucky Barnes took up the shield to become a new kind of Captain America. With Barnes on trial, who will wield the legendary weapon—who will become the new Captain of America? This is the start of a new era for the famed Avenger!

Retrieved from "https://heykidscomics.fandom.com/wiki/Captain_America_Vol_1_615.1?oldid=1651043"
Community content is available under CC-BY-SA unless otherwise noted.