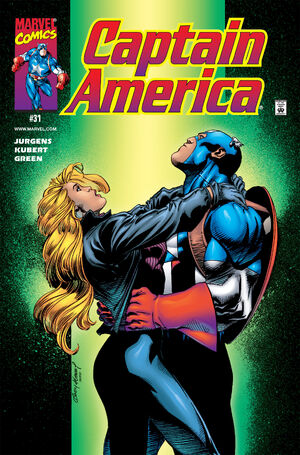 In the aftermath of their battle in the Savage Land, Cap and Sharon talk about their complex relationship. However, their moment is interupted by Nick Fury. In New York, AIM has revived Protocide and informed him that Captain America is his enemy. Also, back in New York, Steve Rogers keeps his previously arranged date with Connie Ferrari. Nick Fury also takes a leave of absence from SHIELD and promotes Sharon Carter as the new head of SHIELD.

Retrieved from "https://heykidscomics.fandom.com/wiki/Captain_America_Vol_3_31?oldid=1728513"
Community content is available under CC-BY-SA unless otherwise noted.