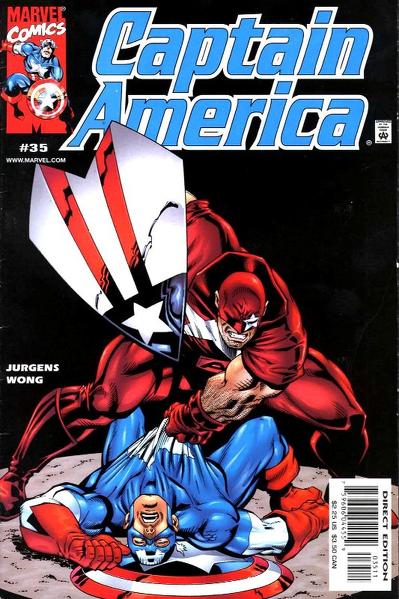 That hurt. I like that. It frees me---from having to hold back.

Appearing in "When Strikes Protocide!"Edit

Synopsis for "When Strikes Protocide!"Edit

Last issue Protocide attacked and impaled US Agent with his distinctinve tri-angular shield. In this issue, we find the still unconcious Agent in a slow recovery. Protocide has been programmed by AIM to think of Captain America as his enemy. AIM also sends Protocide to capture a shipment of the highly dangerous Omega Compound.

In the Middle East Nick Fury and Jasper Sitwell discuss an ongoing operation there which involves Connie Ferrari's brother.

Back in New York, when Protocide goes to hijack the shipment, he encounters Cap. The two battle. Although Cap saves the vial of Omega Compound, he suffers a severe beating from Protocide. The issue ends with an unconscious Cap being attended to by Sharon Carter and Dum Dum Dugan.

Retrieved from "https://heykidscomics.fandom.com/wiki/Captain_America_Vol_3_35?oldid=1416452"
Community content is available under CC-BY-SA unless otherwise noted.