Part of the 'Maximum Security' event 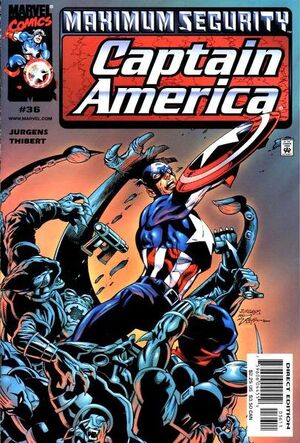 Warming a sideline bench is not my style.

Extra-Dimensional creatures have invaded the earth and attack Conne Ferrari. Fortunately, Captain America rescues Connie from the creatures. Connie makes her way to Steve Rogers apartment (who has changed back to his secret identity) and listens to Connie as she recalls what has happened to her. Not much later, Steve changes back into his Captain Americs uniform to investigate further. He encounters a man called Sarron, who says he can use Captain America's shield and his dimensional oscillator to create a portal to expel the demons. The two go to the top of the Statue of Liberty and Cap allows his shield to be placed in the dimensional oscillator. Suddenly, Sarron transforms into the 4-D man and reveals that he is Mercurio and has duped Cap into assisiting him in escaping Earth and go through a portal back to his home planet. Cap noted that he sensed a trap and springs into action. Vibrations from Mercurio's oscillator is causing the Statue of Liberty to vibrate and fall apart. Cap disengages his shield from the dimensional oscillator and Mercurio appears to either disinegrate or transport elsewhere.

Retrieved from "https://heykidscomics.fandom.com/wiki/Captain_America_Vol_3_36?oldid=1416451"
Community content is available under CC-BY-SA unless otherwise noted.