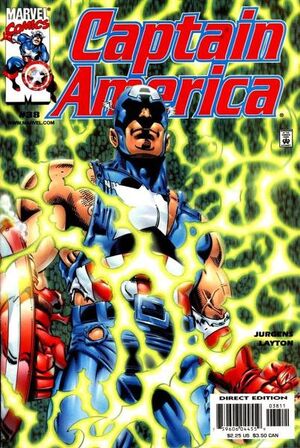 I've been pushed around too long. Tonight... it ends... for one of us.

Appearing in "Across the Rubicon"Edit

Synopsis for "Across the Rubicon"Edit

Last issue Protcide left Cap in a death trap. Cap narrowly escapes and instead of seeking medical attention and despite Sharon Carters' protest, Cap pursues Protocide. It is determined that AIM (in particular Cache and Billups) have electronically manipulated Protocide into believing Cap is an evil person who personally betrayed Protocide in the past. Protocide seems to be rebelling from this programming as he continues to remember some of comments Cap made to him last issue.

Captain America finds Protocide at an AIM station and the two immediately continue their battle. Cache, Billups, and other agents of AIM see this as an opportunity to get rid of Captain America once and for all. They open fire on the two combatants. Protocide and Cap join forces to defeat Cache, Billups and AIM. However, the installation becomes unstable and is in imminent danger of exploding. In an act of heroism, Protocide throws Cap free of the blast and appears to take the brunt of the explosion.

At the end of the story, Protocide is shown, having survived this ordeal and is seen leaving the city.

Retrieved from "https://heykidscomics.fandom.com/wiki/Captain_America_Vol_3_38?oldid=1416449"
Community content is available under CC-BY-SA unless otherwise noted.