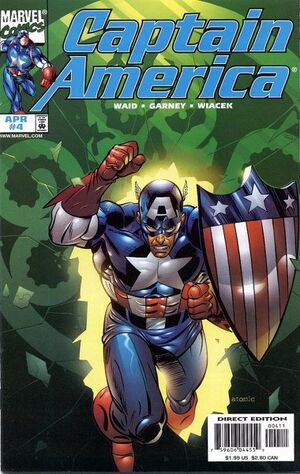 I see you are armed with a new shield, Capitan.

The story starts with Cap diving of a building towards a canister of nerve gas that has been dropped towards the street below. He catches it and grabs an arrow, shot by Hawkeye, with a rope attached. Captain America jumps to the ground and is almost immediately swarmed by fans. A man walks up to Cap and introduces himself as Andrew Bolt, a congressman. He asks Cap if he will endorse his election campaign. Cap responds with no, and says that he trusts the people to vote for the right person without his input.

Retrieved from "https://heykidscomics.fandom.com/wiki/Captain_America_Vol_3_4?oldid=1416483"
Community content is available under CC-BY-SA unless otherwise noted.