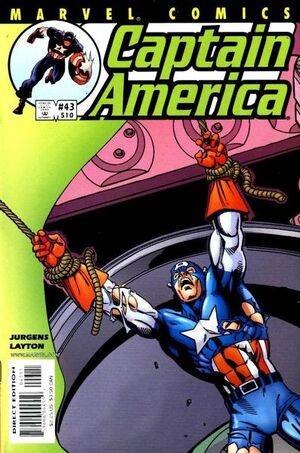 I'm the one person you can trust, Connie!

In Khamiskan, Cap frees himself and defeats the Crimson Dynamo. He also captures David Ferrari and ends his sinister plans to rule the world. Additionally, Cap helps rescue Nick Fury who is recovering from the brainwashing effects administered to him by David Ferrari. Fury had shaken off his brainwashing in time to help Cap foil Ferrari's evil plot.

When Cap brings David back to the United States and his sister Connie Ferrari, Connie immediately accuses Cap and the government of trumping up legal charges against her brother. Cap tries to explain his actions by telling Connie that he is the one person she can trust. He reveals to her that Captain America is her boyfriend Steve Rogers.

Retrieved from "https://heykidscomics.fandom.com/wiki/Captain_America_Vol_3_43?oldid=1491417"
Community content is available under CC-BY-SA unless otherwise noted.