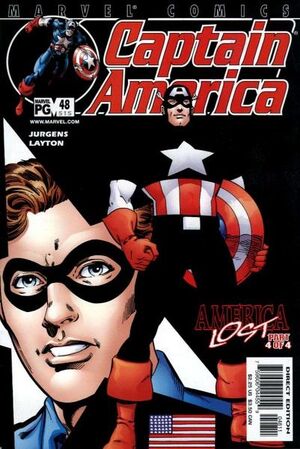 Hate doesn't motivate me. My love for my country does...and you can never beat that.

Cap and Nick Fury defeat the nefarious plans of the Red Skull and Hate-Monger. The story ends with Captain America, the Avengers, Sharon Carter, Nick Fury, and Dum Dum Dugan unveiling a statue memorial for Bucky Barnes on an island in the North Sea. Rebecca Barnes Proctor also makes participates in the ceremony.

Retrieved from "https://heykidscomics.fandom.com/wiki/Captain_America_Vol_3_48?oldid=1416439"
Community content is available under CC-BY-SA unless otherwise noted.