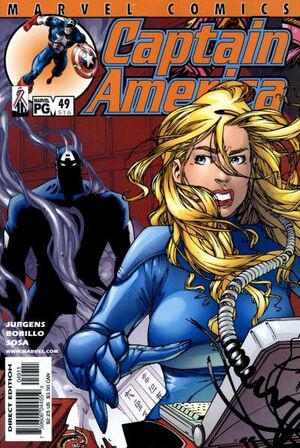 It's like your job as Captain America...is what comes first. And there is no room for anyone else.

Steve Rogers and Sam Wilson are fishing in Idaho and discussing Steve's failed relationships with women. Steve decides to track down Conne Ferrari in Ohio and speak with her about their failed relationship. The two eventually part as friends. Next Steve tracks down Sharon Carter who is in the midst of a covert operation. The two eventually talk. Steve explains that he knows that Sharon is the person for him. Despite Sharon's initial protests, the two kiss and appear to rekindle their romantic relationship.

Retrieved from "https://heykidscomics.fandom.com/wiki/Captain_America_Vol_3_49?oldid=1504856"
Community content is available under CC-BY-SA unless otherwise noted.