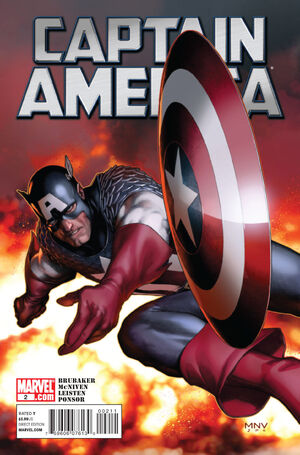 You remember ME, don't you, Rogers?! My new friend told me it was YOU! You STOLE MY DREAM!

In what appears to be a dream, Captain America is crossing a snowy wasteland before a bi-rotor copter hovers over him.

In reality, Nick Fury, Dum Dum Dugan and Cap explain to Sharon Carter about Jimmy Jupiter. He was a boy who could enter the Land of Nowhere, another universe where he could shape anything with his imagination to bring back into the real world. He was found out when he brought a two-headed cat to school and selected to help the Allies infiltrate a Hydra base. Their advantage was that in Nowhere, Jimmy could hone in on other people's dreams, such as a few Hydra agents so that his Nowhere portals could allow Codename: Bravo to them. While Cap, Peggy Carter and Bucky were assaulting the front of the Baron Zemo's fortress, Jimmy was to bring Dugan and Bravo in throw Nowhere. However, a Hydra mole in the French Resistance smashed Jimmy on the head, sending him into a coma and sealing the portal with Bravo, his team inside and the Hydra agents inside it for decades. Since time passes differently, the people trapped in Nowhere haven't aged.

As of present, intelligence has tracked Bravo and his team to an A.I.M. base they've ransacked and they've spotted the heroes' plane. Cap leaps out and lands hard on the ground, going in solo through the base before the other ex-S.H.I.E.L.D. agents join him. Cap smashes his way in and knocks out a Hydra goon named Brently, but is unable to stop the Hydra Queen step through a portal he was guarding. Cap and Fury realize that their quarry must have access to teleport technology from Nowhere that's beyond A.I.M.'s capabilities. Even more strangely, as everyone notes, most of the Hydra goons wear the regular uniform, implying that some deal was being made.

As night falls, Cap can't seem to go to sleep. Sharon reassures him that Fury promised to call them if anything came up. Cap tells her that it's bugging him that Bravo has access to high technologies but strangely wants Jimmy. Reluctantly, he agrees to go to sleep.

Suddenly, Sharon experiences a lucid dream, in which Bravo is influencing it, made the dreamscape apocalyptic, up until he kisses her. Sharon breaks it off, guessing that all this can't be her dream. Remarking that she doesn't just look like her aunt, Bravo promises to see her soon.

Just as Sharon wakes up and Cap is dressed up, a large handed grabs the latter through the window. The owner is in fact Ameridroid, who accuses Cap of stealing his dream.

Retrieved from "https://heykidscomics.fandom.com/wiki/Captain_America_Vol_6_2?oldid=1416353"
Community content is available under CC-BY-SA unless otherwise noted.