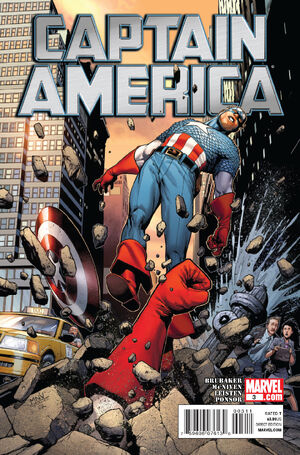 Codename: Bravo and Grace, the Hydra Queen are observing the elderly and catatonic Jimmy Jupiter, hooked up to machines. It is revealed that they picked his brain to control Sharon Carter's dream. They then talk about improving the modern day Hydra.

Meanwhile, Captain America is grabbed by Ameridroid, who accuses him of stealing his dream. Despite his size, Cap is able to outmaneuver his opponent, while avoiding the collateral damage he produces. Sharon tries throwing his shield to him, only for it to wedge into the side of a building. As she gets into her Agent 13 suit, she calls Nicky Fury and Dum Dum Dugan, who are in the middle of interrogating their Hydra prisoner. But before she could call the Avengers, Baron Zemo ambushes her. They both take each other by surprise, as Zemo demonstrates his improved nanotech fiber-laced costume and Sharon's shock-proof suit. Back with Cap's fight, he recovers his shield and delivers a hard blow to Ameridroid, taking off his face and shutting him down. At the moment, Zemo takes the opportunity to cast Sharon out the window. Cap catches her in midair.

Ameridroid is brought to Project Pegasus, where cap, Fury and Sharon speculate why Ameridroid would shut down after one blow.

Closeby, Bravo and Grace are in an ambulance with Jimmy, ready to open the portal to the Land of Nowhere. As soon as it distracts our heroes, attention, Ameridroid reactivates and grabs Cap, sending him right into the portal.

In Nowhere, Ameridroid/Lyle Dekker is back to his flesh-and-blood human body. Dekker becomes excited that Zemo held up to his promise that Nowhere would restore his youth. Unfortunately, Dekker's head is blown off by Bravo. This enrages Cap, who throws his shield, only for it to be caught in midair before being knocked out, as Bravo proclaims Nowhere to be his world.

Retrieved from "https://heykidscomics.fandom.com/wiki/Captain_America_Vol_6_3?oldid=1416352"
Community content is available under CC-BY-SA unless otherwise noted.