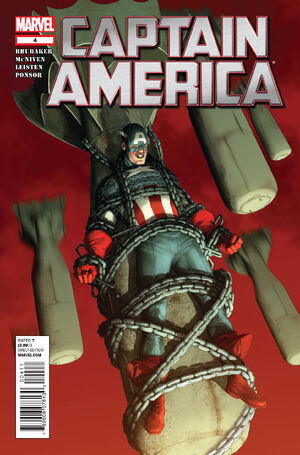 Do you know what it was like, being yanked out of this utopia back into your world? To see how long we'd been gone?! To see you out there...still America's champion... ... My wife is changing the world...your world, this time... Because I love my country, Rogers... And you've fallen down on the job!

Captain America thinks that he's living the American Dream, where Earth is a better place and humanity is expanding into space. But it's all a lie. He has been in fact pulled into the Land of Nowhere and Nicky Fury stresses the need to find Jimmy Jupiter to get him out. Cap realizes the lie when he spots a green light coming from a hole in a brick wall. Tearing through it, he finds himself in a nightmare, where the world is a dystopia. Codename: Bravo reveals him, stating that this is what he sees America as since he got out of Land of Nowhere.

In the real world, Falcon has located the neo-Hydra to a break-in at B.T.&I. Fury realizes that Hydra intends to use Jimmy to broadcast his Nowhere portals across the country. Inside the studio, the Hydra queen has her servant hook up Jimmy, planning on using Jimmy to merge his world with Earth. She is forced to accelerate her plan when Falcon breaches the perimeter.

In the Land of Nowhere, as he tosses his old comrade about, Bravo relates how he and his team were trapped in this world and lost two men. Joining up with the Hydra agents trapped with them, they decided to work together to survive. Within time, they managed to learn how to shape the Land of Nowhere to their liking. He views this world as the utopia and blames Cap for America's disgrace.

In the real world, as they fight through the Hydra agents, Sharon makes her way to the room where Jimmy is being held. However, she is ambushed by the Hydra Queen, who steals her gun and threatens to kill Jimmy and trap Cap in his world forever.

Retrieved from "https://heykidscomics.fandom.com/wiki/Captain_America_Vol_6_4?oldid=1416351"
Community content is available under CC-BY-SA unless otherwise noted.