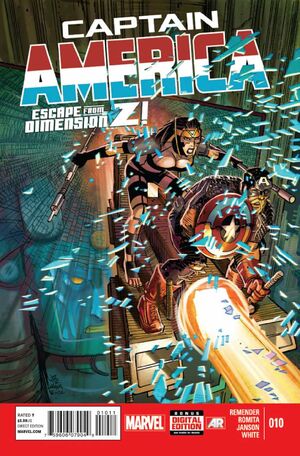 Looks like you're avoiding the altar again, Rogers. I love you.

Appearing in "Castaway in Dimension Z: Part X, Man Further Out of Time"Edit

Synopsis for "Castaway in Dimension Z: Part X, Man Further Out of Time"Edit

Sharon Carter is prepared to leave Dimension Z and return to earth. She tells Jet and Cap that she will detonate Dimension Z as they leave so that Zola's mutates will not invade and infest the earth. Jet Black, still reeling from her father, Zola's, apparent death, is outraged. She punches Sharon, steals her detonator, and races off on a sky sled. Cap and Sharon give chase. Soon Zola's mutates, led the Captain America mutate, pursue them.

Cap falls off Sharon's sky sled and defeats the Captain America mutate. Sharon convinces Jet to return with the detonator. Captain America is also plunging from his sky sled which crashed with his mutate foe. Jet Black catches him and the two ride on the sled. As the group again plans to leave, a larger more deadlier Zola appears. Zola tells his daughter, Jet, that she has failed him again. He shoots deadly eye beams. Sharon almost falls to her death but Captain America grabs her hand. Sharon then tells Steve that she has a plan that they can still detonate Dimension Z and return safely to earth. She slips from Cap's grasp, telling him that she loves him. She lands on the giant Zola and shoots him to death.

Cap urges Jet to take their sky sled, but it is too late. Jet and Cap return back to 51st Street in New York. Steve is visibly upset, crying over his loss of Sharon. Back in Dimension Z, some of Zola's mutates remain and continue to terrorize the world, but they are beseiged by a "Ghost Warrior", a "Nomad". This Nomad of Dimension Z is Cap's son Ian.

• After over a decade in Dimension Z Captain America must make his final push to escape--but at what cost?

• A shocking death and an action-packed conclusion that will leave Cap changed forever and leave you gasping for air!

Retrieved from "https://heykidscomics.fandom.com/wiki/Captain_America_Vol_7_10?oldid=1491364"
Community content is available under CC-BY-SA unless otherwise noted.