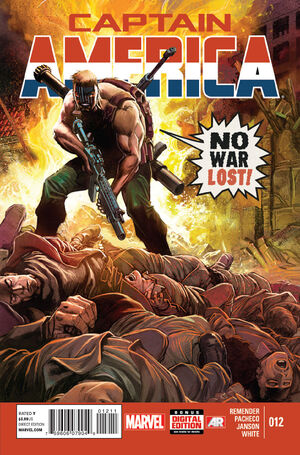 In 1968 atop Mt. Everest, a oriental man descends into the mountain awakens Fin Fang Foom. Foom mystically examines his heart, determines him worthy, and appears to transform the man into a new entity: the Iron Nail.

In the present in Brooklyn, the Falcon and Redwing fly to Steve Rogers apartment. Upon entering, the Falcon is attacked by Jet Black. Steve quickly arrives and asks Jet to stand down. The Falcon notes that Steve has not been around Avengers Tower and that he has heard that Sharon Carter has died in battle. Naturally, Sam is sorry to hear about Sharon and offers his condolences. Captain America and the Falcon go out in costume through the Brooklyn skyline. Steve tells him about his adventure in Dimension Z, his son Ian, and more details about his time there. Steve begins to cry and Sam Wilson comforts him.

In Nrovekistan in Eastern Europe, Nuke is on a rampage against groups he appears as enemies of America. He is getting audio feed from the Iron Nail who is encouraging to strike against the enemies of America. Nuke slaughters several para military types in his rage. Back at the Iron Nail's lair in China, he has captured several citizens who he puts to work immediately without food under the Great Wall of China to work for the rest of their days. He tells his advisor that he is the weapon to be used against the "pigs" in society. To Be Continued.

• Nuke on a rampage!

• The Weapon Minus program revealed!

Retrieved from "https://heykidscomics.fandom.com/wiki/Captain_America_Vol_7_12?oldid=1625562"
Community content is available under CC-BY-SA unless otherwise noted.