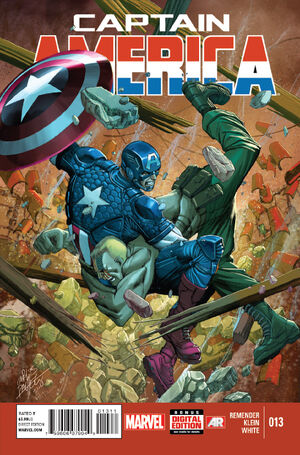 In 1969, Nick Fury and Dum Dum Dugan have a rogue agent, Ran Shen, bound and are interrogating him. Ran was an agent of SHIELD infiltrating China who appears to have gone rogue. The Winter Soldier has also infiltrated the SHIIELD Substation and is listening to the conversation. Ran emits blasts from his chest that ages Dugan and Fury deactivating their Infinity Formula. Ran leaves, copies Fury's optics with a device, and heads towards a mysterious weapons area of the complex. Ran is able to do some reprograming before the Winter Soldier attacks Ran. Fury, Dugan, and several SHIELD agents intervene, but Ran and the Winter Soldier escape.

In the present, Steve Rogers is sleeping somewhat depressed in his apartment. Monica Chang attempts to contact Cap, but the Falcon tells him Steve is in no shape for a mission. Chang notes that Nuke is on a rampage in Nrovekistan and needs Cap to avert an international incident.

In Nrovekistan, Nuke is on a killing genocidal spree. As he continues, Cap, the Falcon and Redwing engage him. Nuke is able to fight off all of their attacks, including Redwing dousing him with a napalm bomb. Nuke emerges from the fire, still on the attack.

• The main event! Captain America vs Nuke with the lives of thousand, and a nation’s future, on the line.

• The Iron Nail rises again! The first appearance of Captain America’s newest arch-nemesis is not to be missed!

Retrieved from "https://heykidscomics.fandom.com/wiki/Captain_America_Vol_7_13?oldid=1625561"
Community content is available under CC-BY-SA unless otherwise noted.