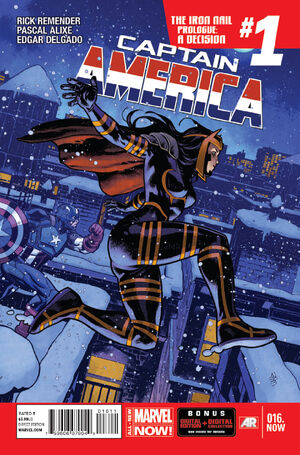 If you are not strong enough to defeat life... Life will defeat you.

Appearing in "The Iron Nail, Prologue: A Choice"Edit

“THE IRON NAIL, PROLOGUE: A CHOICE”

Captain America, the super soldier patriot of World War II…is away! Left in his place is the daughter of criminal Mastermind Arnim Zola—Jet Black! As beautiful as she is powerful, Jet Black must learn the laws of mortal men in New York City. But when a group of Nazi soldiers known as “The S Men,” lure Black into evil—will she follow in the footsteps of her nefarious father?

Retrieved from "https://heykidscomics.fandom.com/wiki/Captain_America_Vol_7_16.NOW?oldid=1416311"
Community content is available under CC-BY-SA unless otherwise noted.