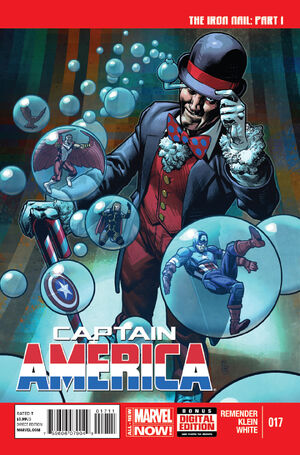 Maybe the Punisher is on to something. Couldn't hurt to darken up the image some.

• The Weapon Minus program reopened! Now that it is, can Captain America put Dr. Mindbubble back inside?

• The Iron Nail begins assassinating the heads of the five largest corporations.

• With Captain America unhinged, Falcon and Jet Black are forced to make a terrible choice!

Retrieved from "https://heykidscomics.fandom.com/wiki/Captain_America_Vol_7_17?oldid=1416320"
Community content is available under CC-BY-SA unless otherwise noted.