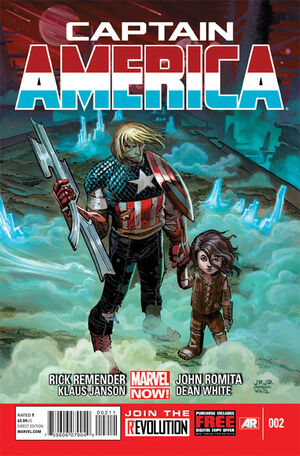 Captain America and his young ward "Ian" are trapped in a desert like environment in Dimension Z. Cap cannot find his bearings or direction due to the chaotic nature of the stars and other phenomenon. Although things are dire, Steve has a flashback to his childhood in 1926 and is reminded of his alcoholic father who lost hope. Steve Rogers resolves not to lose hope for he and Ian.

Steve is suddenly attacked by two of Arnim Zola's mutates. Steve knocks one out with is shield, but the other is about to kill him when he is suddenly bitten in half by "the Thing Beneath the Sand" a giant flesh devouring monster. The monster buries himself under the sand after his kill. However Steve and the other mutate are captured by other mysterious armored human like creatures. Ian, Steve and the Mutate are taken to the leader of these humanoids. This leader now wields Captain America's mighty shield. When the Mutate proudly states that he works for Zola, the leader of these human like creatures decapitates him with Captain America's Shield. The leader then puts Ian in a position to decapitate him as well. Steve begins pleading that neither he nor Ian are allied with Zola. The story ends with a mighty clanging sound effect taking place. TO BE CONTINUED...

• Steve has saved the life of Zola’s son, but can he keep him alive?

• Who are the barbarians of Phrox and what are their intentions for Steve and his new ward?

Retrieved from "https://heykidscomics.fandom.com/wiki/Captain_America_Vol_7_2?oldid=1539389"
Community content is available under CC-BY-SA unless otherwise noted.