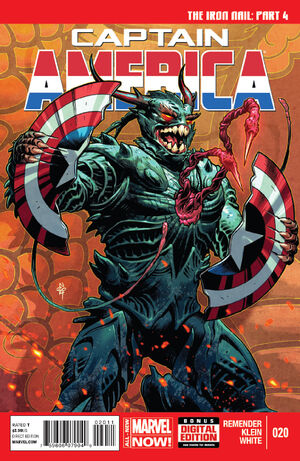 There is no God coming to aid him, pig... but a Zola is the closest thing.

Despite a picture perfect hallucination of a reality for Steve Rogers, the Captain breaks free from Dr. Mindbubble's mental control. He attacks Mindbubble. However, he mentally forces other S.H.I.E.L.D. agents under his control to jump off the Helicarrier. Cap stops his assault. However, Jet Black has entered the hellicarrier and has caught all of the S.H.I.E.L.D. agents who have jumped with her Flying Car.

Jet engages Ran Shen and Cap disposes of Mindbubble. Cap shatters Dr. Mindbubble's "release valve" attached to his head. This releases a thousand dreams into Mindbubbles head and he jumps from the Helicarrier to his apparent death.

• Dr. Mindbubble has learned a secret that will shatter the life of Captain America.

• The Iron Nail’s true power revealed! This is it, the fight that will change the life of Steve Rogers forever after!

Retrieved from "https://heykidscomics.fandom.com/wiki/Captain_America_Vol_7_20?oldid=1416317"
Community content is available under CC-BY-SA unless otherwise noted.