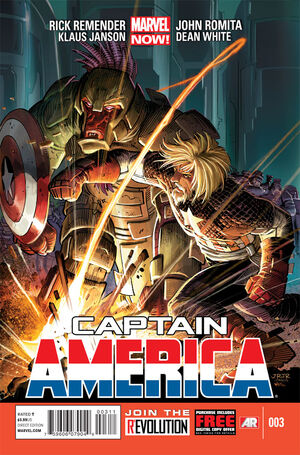 It only takes one to rise for others to follow.

Still trapped in Dimension Z, Steven and Ian convince the alien Phrox not to execute them. The alien Ksul particularly befriends Steve despite the animosity of the tyrant leader, Zofjar. Steve stays with the Phrox recuperating his shattered hand. He thinks back to being bullied and beaten in New York City by Hutch and his gang as well as his friendship with Arnie Roth.

Back in Dimension Z, Steve tells Ksul that he believes Zofgar is a tyrant and should be removed. He encourages Ksul to try to change the way the Phrox are living. Zofjar hears this conversation and begins beating Steve. When Ksul intervenes, Zofjar shoots him in the face. Steve battles Zofjar, but struggles to overpower him. Zofjar slashes Steve's midsection. Steve is able use the last of his energy and punch out Zoljar. Steve then escapes to examine his wound that should be life threatening. Instead he finds, that Arnim Zola's image and technology has been implanted into his body.

Retrieved from "https://heykidscomics.fandom.com/wiki/Captain_America_Vol_7_3?oldid=1416333"
Community content is available under CC-BY-SA unless otherwise noted.