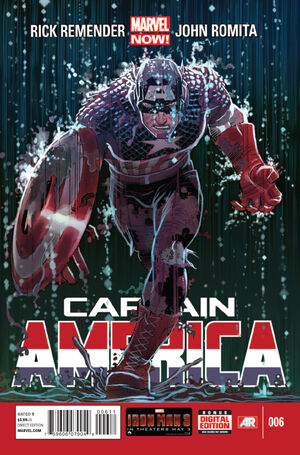 What madness inspires a man to hold power and not use it?

Jet Black prays to an altar dedicated to Zola, to who she worships like a god. During her prayers, Jet admits to feeling drawn to Captain America. Even though she has been taught to hate the notions of compassion and temperance, she feels confused by Cap's decision to spare her life. As she finishes her praying, Jet asks Zola for salvation.

A group of Zola's mutates guard the gate to Zola's stronghold until an out-of-control flying bike crashes into the gate. Then, Steve ambushes the mutants and swiftly kills them. Steve continues into the fortress, ready to put an end to Zola once and for all.

Meanwhile, Jet puts a special armor on Ian so that he begins his new education today. Ian refuses to acknowledge Zola as his father, saying that Steve is his real father. He is also confused as why Jet is so loyal to him, and she replies that Zola taught her that life is a struggle in which one must destroy or be destroyed. However, Ian says that Steve taught him that the strong must always protect the weak and never lose hope. He also feels angry at Jet for causing misery to the Phrox, a good and peaceful race.

As Steve continues into Zola's fortress, he begins to think of the life he lost: he lost his friends, his responsibilities and Sharon. He lost ten years of his life. Even so, Steve refuses to let Zola keep Ian; because even though he has Zola's genes, Ian is a good person. Once he defeats Zola, Steve will give Ian the normal life he deserves. Suddenly, Steve finds dump composed of the failed mutates Zola created in Steve's image.

Meanwhile, Steve has reached the tunnel that brought him to Dimension Zola. Steve briefly considers returning to Earth and getting help from the Avengers, but he cannot leave Ian to his fate just like his own father did many years ago. Steve crawls into the waste tunnels in order to infiltrate the fortress.

Zola orders his forces to destroy Captain America while Jet brings Ian to him in order to begin his teachings. Ian still refuses to believe Zola is his father, but Zola wants Ian to be his heir. He says that his mother, Mary, wanted to call him "Leopold" but Captain America stole him from them. But now that he is back, Zola can re-educate him into being his son. Zola justifies his massacre of the Phrox as a weaker species by a stronger species in evolution. He then places Ian in his share, showing pictures of Captain America in World War II. As Zola watches footage of Bucky, Zola compares him to Ian on how Captain America raised them to fight and kill.

Steve ambushes Jet in the showe with a gun, asking about Ian. Jet refuses to let Ian go with him, saying that Steve kidnapped him and stole him from his father. However, Steve doesn't want to let Ian get brainwashed by Zola and asks about his location one more time. Jet refuses to answer and Steve pulls the trigger.

Meanwhile, Zola has finished re-educating Ian, who says that Zola is his true god.

• Steve Rogers is dead--long live Captain Zola! • A traitor strikes. • Arnim Zola gets everything he wants

Retrieved from "https://heykidscomics.fandom.com/wiki/Captain_America_Vol_7_6?oldid=1491363"
Community content is available under CC-BY-SA unless otherwise noted.