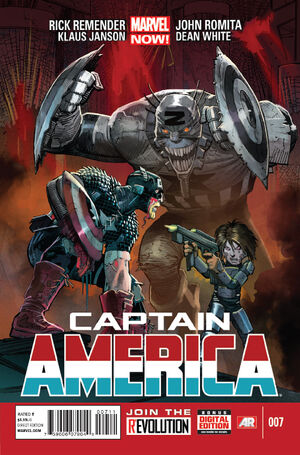 Appearing in "Castaway in Dimension Z, Part VII : Ashes of Our Fathers"Edit

Synopsis for "Castaway in Dimension Z, Part VII : Ashes of Our Fathers"Edit

Two years ago, Steve and Ian were having lunch were the Phrox were harvesting food. Ian asked Steve if he missed his life back on Earth and Steve said that he was happy enough with him. Steve also tells Ian about his father and about how he left his family because he lost hope. Steve has attempted to make not to make the same mistakes his father did and chose not to abandon Ian and always be there for him.

In the present, Steve has infiltrated Tower Zolandia in an attempt to rescue Ian. He also spared Jet, instead, he leaves tied up in her room. Jet informs the situation to her father, who decides not to take any chances with Steve in his fortress and activates his plan.

After defeating Captain Zolandia, Steve moves to another part of the tower and encounters Jet again. As the two come to blows, Steve attempts to convince her to help him save Ian and the Phrox. During the fight, a Phrox female is thrown to a lava pit. Steve tries to save her and asks Jet to help him, appealing to her inner goodness. Surprising even herself, Jet decides to help Steve save the female.

Jet reveals the truth behind Zolandia: the entire tower is in fact a massive battleship that will invade Earth and conquer mankind. Steve and Jet agree to work together to stop Zola. While Jet goes to help the Phrox, Steve attempts to get to Ian. In that moment, Ian, fully brainwashed by Zola, shoots Steve in the back.

Retrieved from "https://heykidscomics.fandom.com/wiki/Captain_America_Vol_7_7?oldid=1416329"
Community content is available under CC-BY-SA unless otherwise noted.