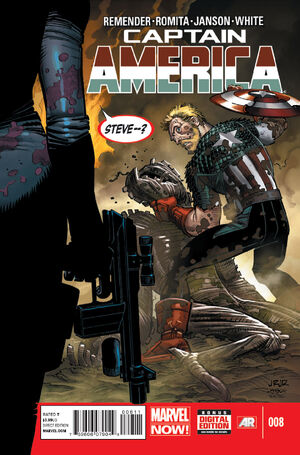 Ian has shot Steve Rogers. Captain Zolandia, one of Zola's' mutates, wakes Steve to beat and torture him some more. He tells Steve that he has his memories and that he knows that Steve Rogers is really the person who killed his mother and that his cause is misguided. Steve impales Captain Zolandia with his shield. Ian then attacks Cap again. Steve eventually punches him and runs off.

Meanwhile, Zola prepares his mutate army to attack the earth. However, Jet Black has turned on her father. Jet releases the Phrox prisoners and prepares to stop her fathers plan. Zola intercepts her and the two prepare to battle.

Ian impales Steve form behind with Captain Zolandia's shield and puts a pistol to Steve's head. Steve urges Ian to make his own decision. Choose to be his son rather than Zola. Steve tells that he chose to be nothing like his biological father and that Ian can too. Ian appears to unravel from Zola's brainwashing. Suddenly, Ian is shoot through the neck from behind. He falls into an abyss below. His killer: Agent 13, Sharon Carter. To Be Concluded?

Steve Rogers has one chance to set any of this right! Broken, beaten and near dead he must defeat Zola or all is lost!
Plus, the reveal of the year! A character you never expected reemerges.

Retrieved from "https://heykidscomics.fandom.com/wiki/Captain_America_Vol_7_8?oldid=1416328"
Community content is available under CC-BY-SA unless otherwise noted.