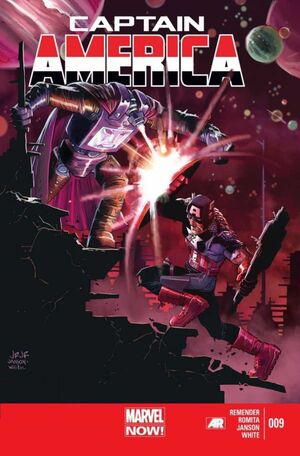 You boys are hungry? Mama's got time enough -- to cook a quick snack.

Cap remembers his now dead "son" Ian. He tells Sharon Carter, who came to his rescue last issue, that he had raised Ian for years. Sharon insists that Steve has not been gone very long, around 30 minutes, since they parted company in Captain America Vol 7, #1. Sharon insists that this is one of Zola's mind games. Sharon has also rigged Zolandia to detonate. At first, Steve says he will not leave. Sharon urges him to "Stand Up" the same phrase his mother used to him as a child. Steve does rise up, but insists that there is someone here he still might save.

In another part of Zolandia, Jet Black is fighting her father. She is losing until Cap arrives and intervenes. Jet Black jettisons and frees the Phrox prisoners of Zola. Zola is impaled and savaged by Cap and finally on the verge of distruction and complete shut down. As he "dies" he tells Jet Black that he is proud of his daughter and urges her to continue his work. Zola expires as the issue ends.

• A new ally from the past arrives, and makes everything worse.

• Zola’s plot is hatched, humanity in the crosshairs.

• The final days Dimension Z are here, and if Steve Rogers escapes intact, he will never be the same again.

Retrieved from "https://heykidscomics.fandom.com/wiki/Captain_America_Vol_7_9?oldid=1416327"
Community content is available under CC-BY-SA unless otherwise noted.