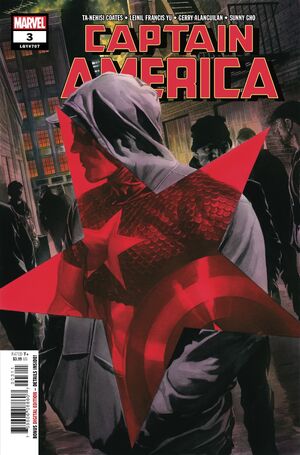 I don't know what Stane was thinking, plotting to overthrow T'Challa. But I'm sure the Wakandans can't wait to talk to him. And me? I want Stane's handlers. I want to know who betrayed these boys... these soldiers... and turned them into cannon fodder.

On a back road in Alberia, Sharon Carter is being driven to a secret meeting by a pair of men who were sent by General Ross. The scenario is suspicious, but the men ask her to accept it, saying it will be "better like this." When they choose a route that she knows will take longer to get to their stated destination, she kills one, then puts a gun to the driver's head, demanding that he pull over and tell her everything.

In a small rural American town, a man named Joe Evers is feeling expansive, and is telling a stranger a story. It's a common-enough story - over the course of Joe's lifetime, the main employer in the area (a coal mine) closed, which meant less money for the school and the church. People did themselves permanent injury trying to keep pace with a cruel world, or simply gave up and fell to addiction. As he grew, he watched neighbors and friends - and family - succumb, and he could do nothing to help them, which left him feeling powerless and emasculated. But all that changed with Hydra. When they took over the national government, they used money to fix the schools, they sent their masked footsoldiers to attack the drug dealers, they provided universal medical insurance, and re-opened the mine to provide employment.

Joe Evers feels ignored by the American government, and by the rich city-dwellers who dismiss his home as "flyover country." But he has respect for Hydra, because Hydra was there for him. And while he does not condone Hydra's "methods," they kept him safe - and when Hydra fell, he thought that safety was gone with it. But Power Enterprises came to his town, and continued funding for the school and the church and the mine. So Joe Evers feels expansive. It is morning in America. "Real America."

Musing, the stranger walks out of town, removing his face-obscuring red cap to reveal that he is Steve Rogers. As he walks, he thinks of his childhood, when America was attacked at Pearl Harbor, and Americans on the Lower East Side took up arms to defend and avenge them. When the only real America was one united by its love of liberty and the democratic process... but that was another time.

Steve is picked up by his allies, T'Challa and Okoye, who are helping him gather intelligence. They go over what they learned - this small town, like the others, is socially active and economically thriving. The mine is devoid of coal, but the workers have an economic incentive to ask no questions. Hydra's greatest weapon was bribery, and that seems to be a lesson that Powers Enterprises has learned well.

With a wave of his hand, T'Challa summons a holographic map of the known associates of Power Enterprises. All have an unsavory past, but all also fought Hydra during the takeover, and so all have a favorable relationship with the current Washington establishment. One of them, Zeke Stane, is operating out of a former Weapon Plus facility located under the local coal mine, which was claimed by Hydra and presumably inherited by Power Enterprises. T'Challa has a royal vendetta to settle with this man,[1] but he needs him alive because his Power Enterprises contact is someone within the American government.

They go in. The facility contains dozens of the Nuke soldiers - American loyalists who were imprisoned by Hydra and subsequently "re-engineered" by Power Enterprises into clones of Frank Simpson. Steve does not want to kill them, but T'Challa has no such compulsions. Steve fights on, driven by the need to find the guiding intelligence that mistreated American soldiers in this way.

T'Challa captures Stane alive, and Okoye activates the virus that kills all the Nuke clones. As Steve and T'Challa consider how they will interrogate Stane, Okoye bursts into the room - access to the console gave her access to the wider comms network, and she knows their opponents intend harm for Sharon Carter...

In Alberia, Sharon Carter has made the driver pull over and is now demanding answers. A hooded figure emerges from the woods, promising answers - and lays a wrinkled hand on the driver's head, causing him to be reduced to a glowing skeleton. The figure removes their hood, revealing the now-youthful face of Selene!

• Cap and the Black Panther embark on a daring raid into the heart of the Nuke army, while Sharon Carter takes on a secret mission into danger!

Retrieved from "https://heykidscomics.fandom.com/wiki/Captain_America_Vol_9_3?oldid=1655589"
Community content is available under CC-BY-SA unless otherwise noted.