Part of the 'Captain of Nothing' story arc 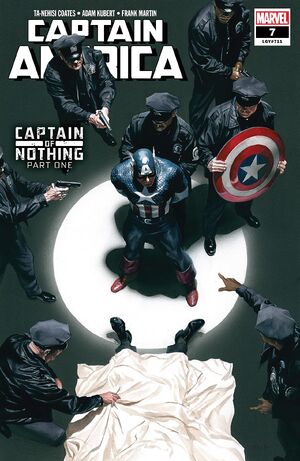 Appearing in "Captain of Nothing: Part I"Edit

SUPERSTAR ARTIST ADAM KUBERT JOINS TA-NEHISI COATES FOR THE NEXT DRAMATIC DEVELOPMENT IN THE LIFE OF MARVEL’S SOLDIER SUPREME!

Captain America — wanted for murder! And the victim is a familiar face in the Marvel Universe! How? Why? You’ll have to read to find out!

Retrieved from "https://heykidscomics.fandom.com/wiki/Captain_America_Vol_9_7?oldid=1655593"
Community content is available under CC-BY-SA unless otherwise noted.