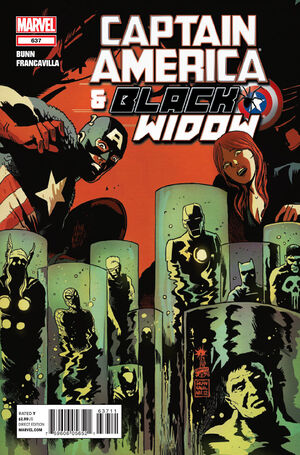 You come at me with that shiv, you're going to wish this was an alternate reality where the earth was ruled by proctologists.

Captain America discovers that there are two Black Widows, and one of them is trying to kill him. During their conflict, he and the two women are "dumped" into an inter-dimensional whirlpool and end up on a multiversal world where multiple versions of Kash Vennemas exist and HYDRA-tripods patrol the landscape.

Retrieved from "https://heykidscomics.fandom.com/wiki/Captain_America_and_Black_Widow_Vol_1_637?oldid=1416251"
Community content is available under CC-BY-SA unless otherwise noted.