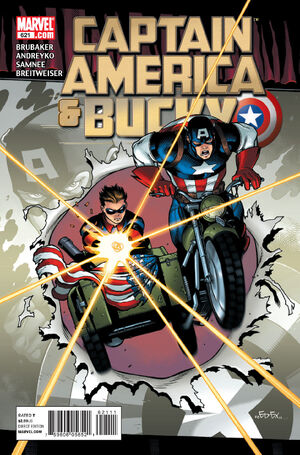 I was just thinking over and over about what Steve had said... About killing a man and what the hardest part was... And I was hopin' like hell he'd been lyin'.

Steve Rogers and Bucky are watching a film version their adventures; Bucky criticizes the advertisement for making him out like a sidekick. He still spews his criticism after they leave the theater. When they get back to their cabin, Bucky asks Cap why they aren't out in the field, fighting Nazis. Cap tells him that they can do some good here and says that taking a life is not so simple. A soldier then walks up to tell them that the general wants to see them.

Cap and Bucky are sent to a carnival to look for an informant. Deciding to improvise, Bucky asks out two girls for a double date, to improve their cover. Cap learns from their informant that the Brandt Brothers, sons of the developer of nerve gas and an associate of Hitler, have been getting large shipments of crates. They covertly search the crates, finding lion-shaped statues. they are then caught by the Brandts. Luckily, they are able to escape with help from their dates. Unfortunately, this gets the Brandts suspicious.

When they return at night, they find the entire carnival entirely deserted and packed up. Worse, they informant is found bleeding. His last words involve a warning that the Brandts are planning to kill an entire station full of soldiers due to leave. The duo race to catch up with the Brandt's train. Bucky make his way across the train cars, accidentally alerting the Brandts to his presence. Cap arrives to back Bucky up, but not before he gets a knife in his leg. But he gets close to the engine, where the engineer is loading the statues into the furnace. As the train is getting close to the station and the engineer is ready to release the gas, Bucky is forced to throw the knife through his throat, killing him.

Cap later reminds him that he did save a number of innocents. Bucky claims to be fine, before asking if he's got mail. Already, a letter has come from his sister. As he solemnly reads it, he claim that his sister is doing well in school and agrees to write her back tomorrow. Bucky then walks out onto the porch, thinking about his first kill.

Retrieved from "https://heykidscomics.fandom.com/wiki/Captain_America_and_Bucky_Vol_1_621?oldid=1416623"
Community content is available under CC-BY-SA unless otherwise noted.