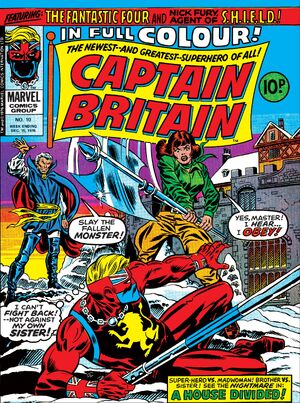 Appearing in "Dagger of the Mind!"Edit

Synopsis for "Dagger of the Mind!"Edit

Captain Britain finds himself facing a foe he cannot fight; his own sister, mind controlled by Dr. Synne!

Retrieved from "https://heykidscomics.fandom.com/wiki/Captain_Britain_Vol_1_10?oldid=1416964"
Community content is available under CC-BY-SA unless otherwise noted.