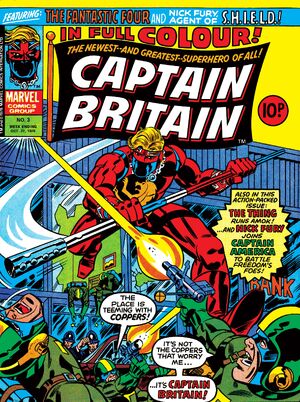 Appearing in "Mayhem on a Monday Morning!"Edit

Synopsis for "Mayhem on a Monday Morning!"Edit

Captain Britain stops a bank robbery, but Detective Chief Inspector Dai Thomas is in no mood to be grateful to him. And, we meet Brian Braddock's classmates at Thames University! But waiting in the wings is a new threat: Hurricane...

Retrieved from "https://heykidscomics.fandom.com/wiki/Captain_Britain_Vol_1_3?oldid=1416957"
Community content is available under CC-BY-SA unless otherwise noted.