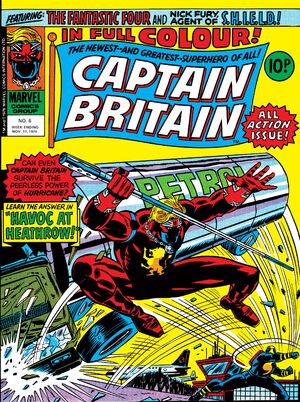 Appearing in "Havoc at Heathrow!"Edit

Synopsis for "Havoc at Heathrow!"Edit

Captain Britain battles Hurricane at Heathrow Airport, and ends up chained over the air intake of a Concorde, facing a horrific and messy death when Hurricane starts its engines...

Retrieved from "https://heykidscomics.fandom.com/wiki/Captain_Britain_Vol_1_6?oldid=1416960"
Community content is available under CC-BY-SA unless otherwise noted.