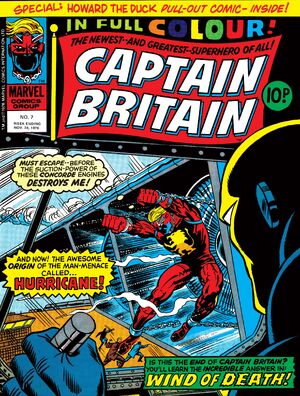 Appearing in "Wind of Death!"Edit

Synopsis for "Wind of Death!"Edit

The final battle with Hurricane, as the mad meteorologist's origin is revealed at last. What drove twisted genius Albert Potter to become a supervillain?

Retrieved from "https://heykidscomics.fandom.com/wiki/Captain_Britain_Vol_1_7?oldid=1416961"
Community content is available under CC-BY-SA unless otherwise noted.