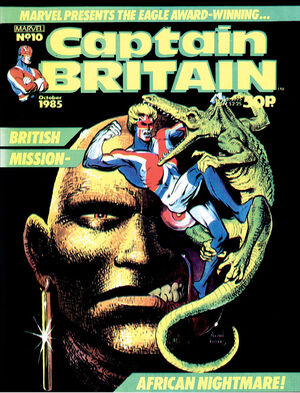 He was older than me. He always liked to enjoy himself. I used to admire him for that. Now it makes me sick to know that he's my brother. I hope they kill him. But I don't want to be here when they do. I've got to go. Not back to the manor...anywhere but there.

Captain Britain travels to Africa to save his brother from Doctor Crocodile-only to learn that he may not deserve to be saved.

Appearing in "End of the Line"Edit

Synopsis for "End of the Line"Edit

Appearing in "P.A.R.T.S V the Universe"Edit

Synopsis for "P.A.R.T.S V the Universe"Edit

The Final chapter, as the Thieves learn who has been manipulating them.

Daak locates another recruit-a man with good reason to hate him.

Retrieved from "https://heykidscomics.fandom.com/wiki/Captain_Britain_Vol_2_10?oldid=1513651"
Community content is available under CC-BY-SA unless otherwise noted.