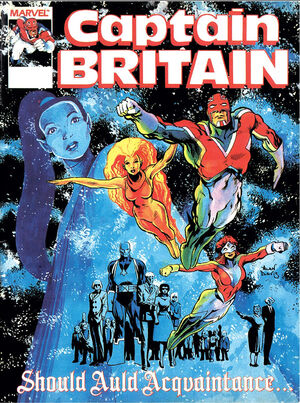 My lady Roma has informed me that the cause of the Warpies has been removed, and no more will be born...I am instructed to protect and prepare those that already exist for the challenge of their future. You and the RCX may remain to assist me in my task, but please be advised...I am in control of this situation.

Appearing in "Should Auld Acquaintance..."Edit

Synopsis for "Should Auld Acquaintance..."Edit

Captain Britain and Meggan come to the assistance of the Captain's old nemesis, Dai Thomas.

A fateful decision for the Cherubim.

Appearing in "The Stone Killer"Edit

Synopsis for "The Stone Killer"Edit

The Knight and Captain Britain against the villainy of Mordred!

A moment of weakness puts Scoop Daly in a dangerous situation.

Retrieved from "https://heykidscomics.fandom.com/wiki/Captain_Britain_Vol_2_14?oldid=1531910"
Community content is available under CC-BY-SA unless otherwise noted.