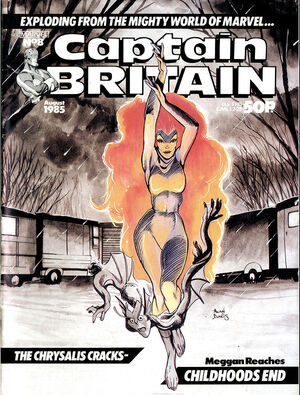 ...You are beautiful - like an iridescent butterfly... ... Your aura...your potential. You don't need to appear as you do, Meggan. ... You were like soft clay, moulded by the fear and superstition of your people... They misunderstood your power, your instinct to protect yourself from the cold... ... Perhaps [you don't understand] now. But when you do, the caterpillar will become a butterfly!

The mob sets a trap for Night Raven.

The Space thieves go on the offensive.

Appearing in "Farewell to Draconia"Edit

Synopsis for "Farewell to Draconia"Edit

Retrieved from "https://heykidscomics.fandom.com/wiki/Captain_Britain_Vol_2_8?oldid=1417001"
Community content is available under CC-BY-SA unless otherwise noted.