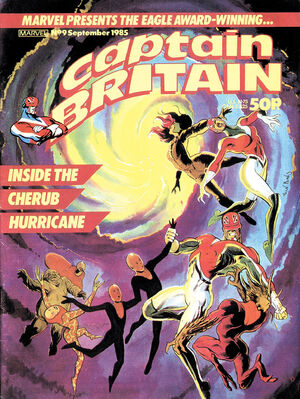 So simple to guide them. To align them. Such basic intellect. Their desire for treachery is innate.

Appearing in "Winds of Change"Edit

Synopsis for "Winds of Change"Edit

Captain Britain and Meggan take on the Cherubim.

Night Raven vs the Assassin.

The Thieves have a run-in with Lucinda's father, a local crime boss.

Retrieved from "https://heykidscomics.fandom.com/wiki/Captain_Britain_Vol_2_9?oldid=1417002"
Community content is available under CC-BY-SA unless otherwise noted.